This week in Science we learned about gastropods and had a surprise guest visit as well.

First we took a look at some shells. We knew that they belonged to snails.

These types of snails live in the water, but others live on land. This week, we learned about the land (terrestrial) kind.

This is a snail.

The class didn’t think it was a real snail – imagine that. 🙂

A snail has four tentacles – two large ones with eye spots on the ends for distinguishing light from dark and two small ones for smelling and feeling. It also has one shell, which it lives in for its entire life. As the snail grows, it makes its shell larger.

When a snail feels threatened, it pulls its entire body inside the shell.

Here are photos of a snail ‘coming out’ of its shell. We discussed the process, from tentacles peeping out

to ‘sliming and sliding’ away. However, a snail can never come all the way out of its shell because its body and the shell are connected. 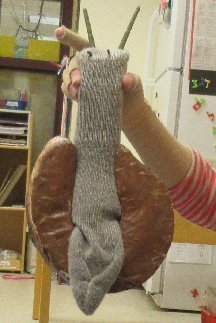 which means ‘stomach-foot.’ A gastropod has one huge foot that is underneath its stomach.

Next we met another gastropod — a slug.

A slug’s/snail’s tongue is called a ‘radula.’ The radula is covered with tiny teeth.

The slug stuck out its tongue.

We all felt the slug’s tongue.

When a slug wants to eat something, it sticks its tongue out of its mouth and flattens it out. It then scrapes the food with its rasping tongue. Tiny bits of the food break off, and the slug pulls the tongue (and food) back into its mouth. When it pulls its tongue in, it curves it – so that the teeth point inward toward the middle of the tongue. That way it doesn’t injure itself. We tried doing that.

and took a look at photos of the real things:

Slugs and snails are molluscs – which are not related to worms or snakes even if they may look a little bit like them.

Then we got to meet some real snails and slugs that I dug up in my yard. Before bringing out the critters, we discussed one more fact. Slugs don’t have shells to hide in like snails do. To protect themselves, they produce large quantities of slime. Slime makes them slippery and hard to catch. It also makes them very messy. Slime can’t hurt you, but it is really hard to wash off. It actually absorbs water. So, we all agreed that we would look closely at our guests but not touch them.

Once the snails and slugs were out of the jars and were getting situated, we met our surprise guest – a baby salamander (which I also found in my yard this past weekend)!

Salamanders look similar to lizards, but they are amphibians – like frogs.

We spent quite a bit of time observing the snails, slugs and salamander:

The next time you’re outside, take a look around – you never know what you might find!