With Shavuot beginning on Saturday night, this week in Science we learned about cows and butter. (It is customary to eat dairy foods on Shavuot.)

First we talked about where milk comes from. We decided on ‘cows.’

When we are talking about cows, the babies are called calves. Boys are called bulls and teenage girls who haven’t had any babies yet are called heifers.

The only ones that are really called cows are the mommies of the group. They make milk mostly for their own babies, but they share it with us so that we can drink it too.

When asked what cows look like, the answer was ‘black and white!’

While it is true that some cows are black and white, like these Holsteins (the most common type of dairy cattle in the United States),

not all cattle are black and white. Some are brown and white 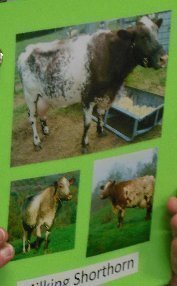 and some are all white, all black or all brown. 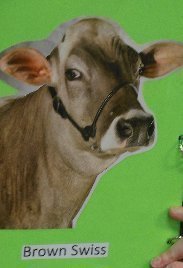 …and no matter what color the cow is, they all produce white milk.

We had a lot of excitement in class

– a Holstein came to visit!

After we learned the proper technique for milking a cow,

everyone got a chance to try it.

While all that milking was going on, we poured some heavy cream into a container,

closed the lid, and shook…

and shook the container until we couldn’t hear the marble rolling around inside it anymore. At that point, we had whipped cream.

We kept shaking the container

until the solid part separated from the liquid and we could hear a ‘thunk’ sound.

Then, we looked inside…there’s butter in there!

Finally, after collecting butter from around the marble (which we didn’t eat), we discovered that fresh butter on crackers tastes really good!