This week in Science, we learned about the life cycle of a ladybug.

First, we looked at a giant ladybug and discussed what we already knew about them. 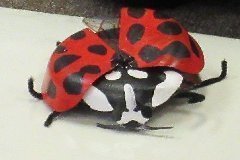 It has two eyes, two antennas, and six legs (as do all insects).

We talked about what other kinds of creatures the ladybug might be related to – and found them on our taxonomy chart.

Ladybugs have interesting wings. They have two hard wing covers that each conceal a flying wing. The line that runs straight down the middle of a ladybug’s back is the place where the wing covers meet. This characteristic line distinguishes all beetles from other types of insects. When the ladybug wants to fly, it lifts the wing covers up to expose its flying wings like this:

We skimmed through Grub to Ladybug by Melvin and Gilda Berger: 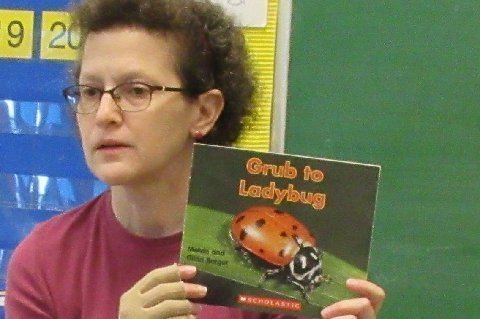 This book showed us photographs of the life cycle of a ladybug.

Eggs…and around we go again. 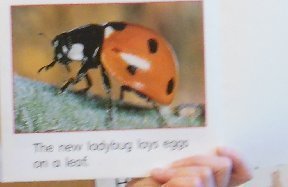 We also looked at a poster-in-progress of the life cycle of a ladybug. I noted that, while I’ve been working on the poster for several years (using photos I’ve taken in my yard), I’ve never been able to find ladybug eggs. I’ll just keep looking and will leave a space on the page for the eggs. 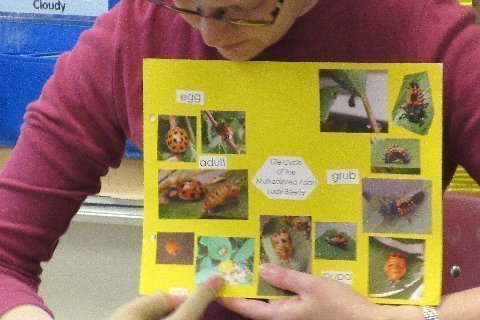 We learned that not all ladybugs are red with black spots. In North America there are 400 different species of ladybug. We took a look at photos of some of the different types that live in this area. Some were yellow with black spots, some were black with red spots,

and some were black with yellow spots.

Next, we got to see the real creatures up close – I found Multicolored Asian Lady Beetles in various stages of maturity in my yard a few days ago. There were ladybug grubs which we moved to smaller fog-free containers so that we could see them clearly.

There was a jar containing adult ladybugs and there were also twenty small containers containing old pupa molts.

Once the ladybugs are fully developed, they crawl out and leave the molts behind (for science teachers to collect and put in containers).

Ladybugs and ladybug grubs can bite, though the bite doesn’t usually cause a reaction in people. Because of this and the facts that mature ladybugs fly and the grubs can run pretty fast, we left all of them in closed containers just to be safe.

We spent some time studying all of the creatures.

We thought that was the end of class. However, in my next class, several children discovered ladybug eggs in the jar with the adult ladybugs. I was a little bit excited.

I came back to Room 201 to show everyone the eggs. 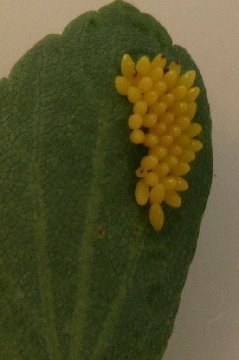 They looked just like the ones in the book. Amazing!

Now I can finish my poster.