This week in Science, we compared and contrasted matzah and bread.

We practiced using all of our senses.

First, we listened to the bread as we broke it into pieces: 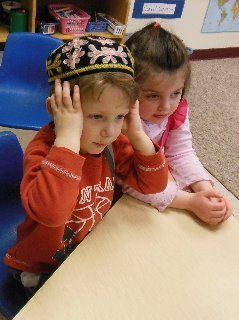 It made cracking sounds when we broke it into pieces.

We also looked at close-up photos of matzah

Matzah has little tiny holes that are lined up. Bread has holes too, but they are different sizes and shapes.

Everyone got a piece of matzah and a piece of bread and we looked at them very carefully. 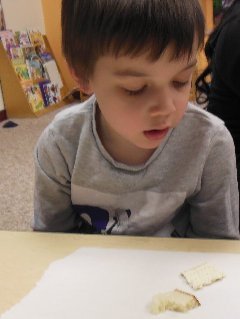 We touched the matzah – it felt smooth and bumpy.

The bread felt soft and squishy.

Next, we smelled the matzah and the bread, and then finally, we got to taste them.

They were both yummy.

The popped bubble-wrap was like matzah because it was flat. It was flat because I poked a hole in each ‘bubble,’ allowing the air inside to escape. Before matzah is baked, holes are poked in the dough. This prevents bubbles from becoming trapped in the dough (which could cause it to rise a small amount).

The un-popped bubble-wrap was like bread because it was bouncy. That’s because the bubbles were full of air that was trapped inside.

Last, we did an experiment to see where the bubbles in bread come from.

The bubbles in bread usually come from carbon dioxide released by yeast. We can create similar bubbles by mixing vinegar and baking soda.

First, we all smelled the vinegar.

Then the vinegar was poured into a bottle. 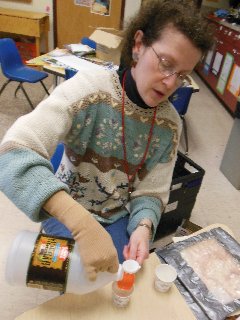 Next, we measured out some baking soda

and poured it into a balloon. The neck of the balloon was pulled over the bottle opening.

On the count of 1,2,3… the balloon was lifted up, and the baking soda fell into the vinegar. Look what happened!!

Now we have a better understanding of why bread is fat and matzah is flat!

Wishing everyone a Chag Kasher v’Sameach and a lovely and relaxing vacation,