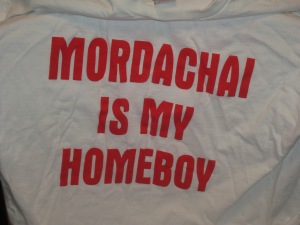 Hi, It’s Kara from the front office. I wanted to write a quick blog post about Purim. I am not Jewish, but have been working at Beth Shalom since June of 2011, and consider myself a Jewish Educator. Last School Year was really a time of me learning about the different holidays and traditions of the Jewish Faith.

Right when I started here at Beth Shalom, I was going through closets and getting myself situated when I found a random t-shirt in the closet. You can imagine my surprise as I pull out this t-shirt that says “Mordachai is my Homeboy.” I was raised in a Christian household and also have a BA in Religious Studies, so the name Mordachai didn’t surprise me, but the fact that he “was my homeboy” and there was something called a “Purim Carnival” did.

You have probably been seeing signs around school for all these funny days and a request to wear a “Purim Costume” on Friday. Some of you may be wondering what this means, just like I did. Purim is a Jewish holiday that celebrates when the Jewish people were saved from destruction in the Persian Empire. This story is also told in the Biblical Book of Esther. King Ahasuerus chose Esther as his wife. The Kings’ adviser Haman (booo) planned to kill all the Jews in the empire. Esher’s uncle Mordachai (yay!!)  heard what Haman planned to do and Esther planned to stop Haman. Esther held a feast and invited Haman, and in front of everyone she told the King she was a Jew. Esther told the King that Haman wanted the Jews to die, and the King decided to save the Jews, but to kill Haman. So on this day Esther and her cousin Mordachai saved the Jews, and so Purim is a time to celebrate!

So why have you seen signs about crazy hat day? Dressing as a prince and princess? Wearing a costume? On Purim, families dress up and come to the synagogue to hear this story read from a scroll called the Megillah. We dress in costume, make noisemakers (called groggers) to make noise when we hear Haman’s name. We also make Hamentashen (meaning Hamen’s pocket) which are special triangle shaped cookies filled with jam. We also give Shalach manot (baskets of food and treats) to each other.

So we look forward to this week! What is the schedule?

On Friday, there is an all Family Purim celebration at 1 p.m. in the Samuel and Minnie Hyman Ballroom where our children will sing and dance (and then we enjoy Hamentashen!)

For those who want to come to the synagogue there is a Family Megillah reading in the Samuel and Minnie Hyman Ballroom on Saturday at 6:45 p.m.

On Sunday there is a Purim Carnival in the Samuel and Minnie Hyman Ballroom, from 10 a.m.- 1 p.m. Come for carnival games, hot dogs, and hamentashen!

So is Mordachai my homeboy? Yup! And we hope that you will join us for all of our Purim Festivities!