In light of Wednesday’s field trip to the Symphony, this week in Science we learned some things about xylophones.

First we used a mallet to tap the bars on this instrument:

We thought it was a xylophone, but it didn’t sound ‘right.’

Why not? To find out, we compared it with a second instrument. (We knew the second one must be a real xylophone because it had all of the colors.)

After many suggestions, we decided that the bars were in the wrong order. How could we move the bars? It turned out that they were Velcro-ed to the frame, so it wasn’t difficult at all. 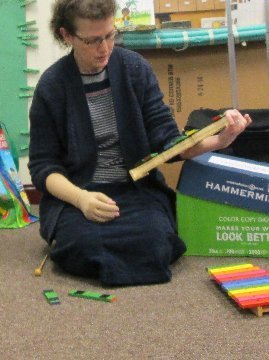 Once we rearranged the bars in size-order, the xylophone sounded much better.

Next, we took out another instrument. 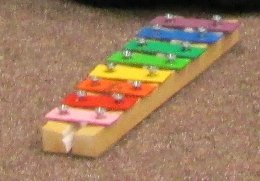 It looked like a xylophone, but it wasn’t one. The word xylophone comes from ‘xylon’ = wood and ‘phone’ = a sound. Only instruments made out of wooden bars, like the first two we played, are true xylophones.

The third instrument is called a metallophone because it has metal bars.

No – it was another metallophone….

and then, another xylophone.

Once we had all of these instruments out, we noticed some things about them.

We checked out this ‘Long is Low, Short is High’ rule on each instrument. It was always true, no matter what the instrument was made from…

even if it was made from wrenches! 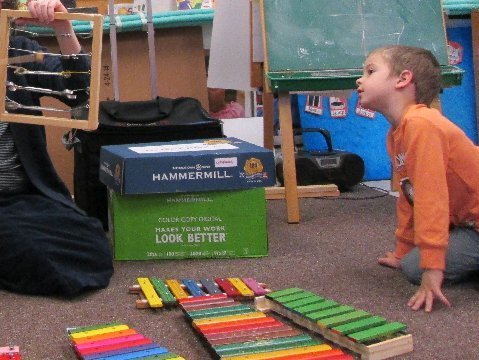 This year, at my house, we bought new lumber for our sukkah. That meant that I had a lot of old lumber sitting around just waiting to be made into a giant xylophone!

Everyone got a xylophone bar and we used two long pieces of wood to form the xylophone’s frame. 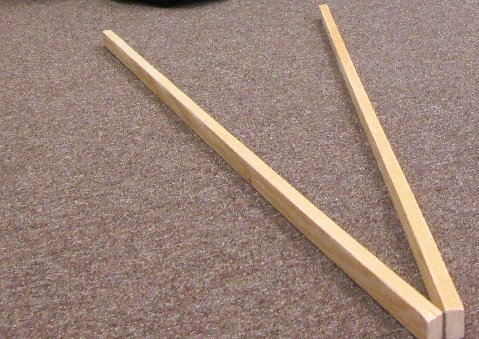 Next it was time to figure out where to place each bar. We needed to put all of the bars in size-order from big to small. We compared the bars, measuring them against each other one at a time, until we had them all in the right order.

When the xylophone was assembled, we tested it out.

…and then the moment we had all been waiting for. It was finally time to play all of the instruments!

It was like the Symphony was right there in our classroom! 🙂