This week in Science, we compared and contrasted butterflies and moths.

First, we reviewed our caterpillar lesson from a few weeks ago. We picked out the two types we observed in class. (top left and bottom right)

Then we compared ourselves with an Eastern Tiger Swallowtail butterfly.

For example, we each have two eyes, two legs, no wings, use our nose for smelling and our tongue for tasting.

A butterfly has two eyes, six legs, four wings, smells with its antennae and tastes with its feet.

I was the only one in the room that had ‘real’ antennas.

A butterfly also has a ‘proboscis’ – a sort of tongue / straw that it uses to drink nectar. The proboscis is curled up under the insect’s face: 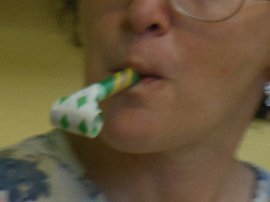 Next we took a look at a Cecropia moth.

Again – two eyes, six legs, four wings, smells with its antennae and tastes with its feet.

…but the moth’s antennas don’t look at all like the butterfly’s.

How can we tell if a creature is a butterfly or a moth? We learned four differences between them.

(Note to email readers: There are hundreds of butterflies and thousands of moths in North America alone. The following distinctions are generally true, but many exceptions exist.)
1) Antennas

Butterfly antennas have balls at the ends.

We could see the balls on the ends of the Pearl Crescent’s antennas:

Butterflies generally fly during the day.

Butterflies rest with their wings held upright. We tried doing that. It’s not very comfortable.

Moths rest with their wings folded over their backs

or stretched out flat. 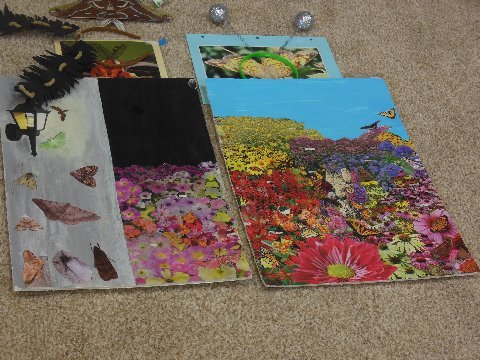 Moth and butterfly caterpillars both hatch out of eggs, and their life cycles are very similar with one exception.

Before a caterpillar turns into a butterfly, it forms a chrysalis. A moth spins a cocoon.

as cute as it is, is wrong on this point. Butterflies do not come out of cocoons – so either the cocoon in the story should be a chrysalis or the beautiful butterfly is really a beautiful moth.

Finally, we got a chance to compare a real cocoon and chrysalis.

A few weeks ago we observed some Milkweed Tussock Moth caterpillars at school. They looked like this:

The cocoon we looked at todaywas made by a Milkweed Tussock Moth caterpillar.

A few weeks ago we also observed a Monarch butterfly caterpillar. It looked like this:

A week later, when it was much larger, it climbed up the side of the jar and formed a chrysalis. We got to see the chrysalis in class today.

I’m hoping that a butterfly will emerge sometime next week.

Before we finished class, we also took a look at an old chrysalis – this is what is left after the butterfly emerges: